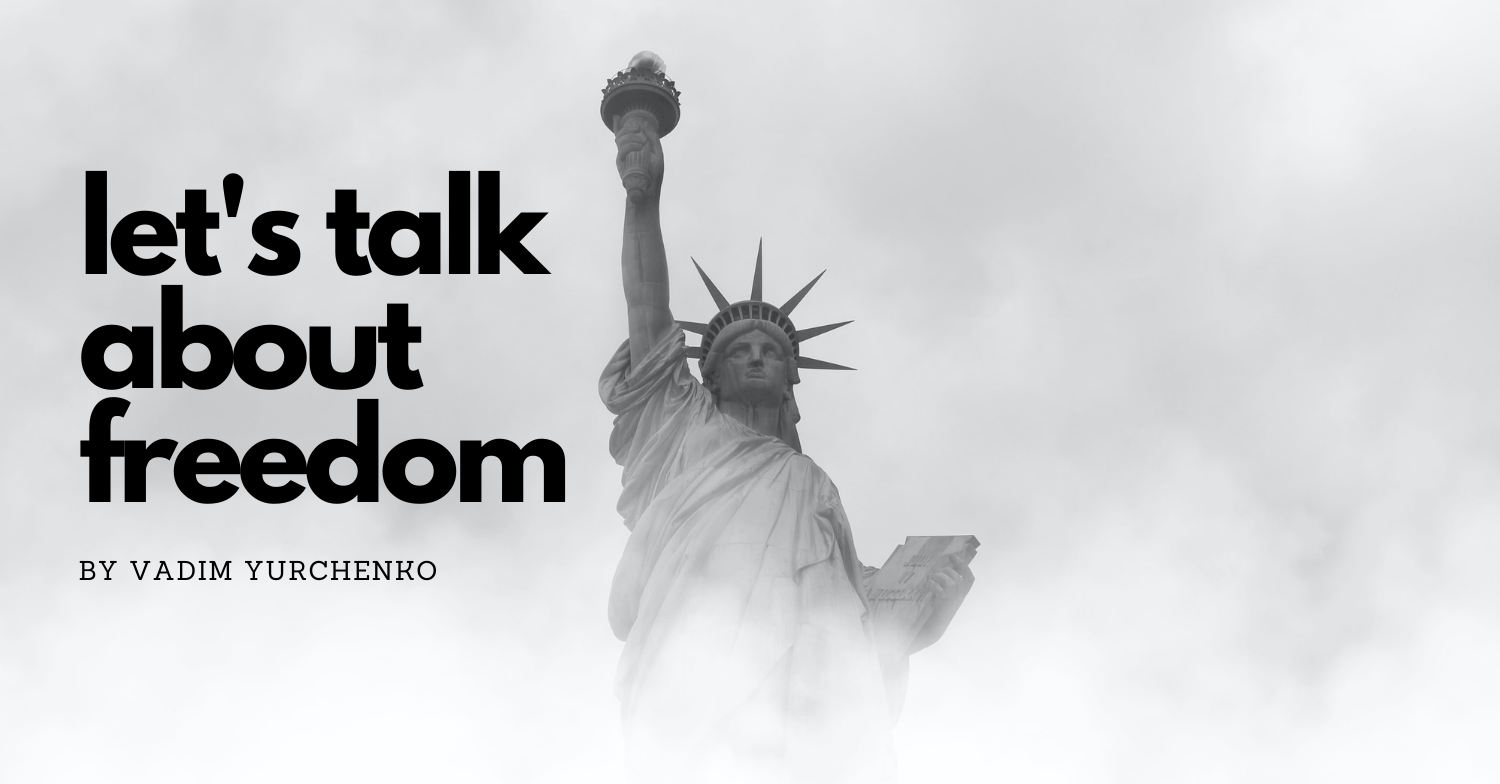 I love freedom. And who doesn’t? Who doesn’t want to live in a country where their individual rights are protected? No one wants their rights be trampled upon. Whenever we hear about the atrocities committed by the communist governments, we shriek with disgust. We disapprove of dictatorial regimes that rob human beings of their rights, their value.

You and I are creatures of freedom, created to be free. We are justified to fight for what rightfully belongs to us.

A quick scroll through social media posts is enough to realize that you are entering a political minefield. This is dangerous territory, where one wrong word can cause an explosion of emotionally heated opinions. The landscape is peppered with words like “democracy,” “autonomy,” and phrases like “rights and freedom,” all waiting to detonate and kill anyone who is approaching rashly and recklessly.

In the trenches, experienced soldiers—freedom fighters—who are committed to the vision of a liberated world, the world where the rights of an individual are treasured above all else.

They believe you can't be just an observer--you must take sides.

You must fight for freedom, even though freedom means different things to different people.

To an African American slave working in the fields of the Southern state at the end of the eighteenth century, freedom meant a different thing than it is to a modern freedman living in a luxurious apartment downtown New York. Freedom that Martin Luther King Jr. strove for isn’t the same freedom that British soldiers in World War II fought for.

The First Amendment to the Bill of Rights is perhaps one of the most important documents in the history of the United States of America. Adopted in 1791, the First Amendment is a symbol of civil freedom and functions as an agreement between the government and the people.

A covenant of sorts.

“Congress shall make no law respecting an establishment of religion, or prohibiting the free exercise thereof; or abridging the freedom of speech, or of the press; or the right of the people peaceably to assemble, and to petition the government for a redress of grievances.”

By signing the document, the government promised people to protect them.

The government was committed to fighting for people, to fight for their freedom.

Interestingly, this is one of those unique moments in history when the government makes a law that forbids them to create other laws that would somehow infringe on individual liberties. We know that from the beginning, James Madison, the man responsible for the writing of the First Amendment, opposed the idea. He was afraid that such a move would engender distrust between the government and its people. But Madison also knew that not having a law to hold the government in check would have potentially devastating consequences for the country, and so went supported the signing of this monumental document. Madison and his followers viewed human freedom as a law. For them, people were above the law.

And so, the First Amendment was created.

The promise was made.

But somewhere along the way, that promise was violated. The covenant was broken. Trust between the government and the people was lost.

Today the people continue to quote the old promise, reminding the government about what they once promised, hoping that perhaps this time they will be heeded. But the broken relationship makes it impossible for the two sides to hear each other. For the relationship to work again, trust must be regained. And trust is not something established by law.

Trust is a relationship.

It’s above the law.

Today, it seems, out of the five civil liberties listed in the First Amendment, the people tend to exercise their right to petition the government. But petitions made in the name of freedom often turn into demands. People don’t feel heard; the government doesn’t feel listened to.

Relationship—the basis of the First Amendment—is a cracked foundation.

Canada: God Above All?

If you are a Canadian, you are probably familiar with the Constitution Act of 1982. This important document lists the fundamental freedoms and rights, including freedom of religion, freedom of thought and belief, freedom of peaceful gathering. The list is not exhaustive. You will be surprised that you have more freedoms and rights than you think you have.

You will also be surprised to find out that the Canadian Charter of Rights and Freedoms regards divine authority as the foundation of individual freedom. The document's opening line states that

“Canada is founded upon principles that recognize the supremacy of God and the rule of law.”

This is not unlike the declaration “in God we trust” found on the US dollar bill. Of course, neither the Charter of Freedoms nor the American dollar obligates you to believe in God; the law is such that you have the right to your own opinion regarding religion and spiritual matter. Much like each person has the right to make their own health choices.

That being said, those quoting the law to support their freedoms and rights should also remember the first clause. We shouldn’t ignore it.

Canadian law recognizes that God is supreme over all. It acknowledges that he is the ultimate authority and that we all are under the rule of Heaven—both government or those under it.

No one is above God.

Not even the government.

I think that’s what the “rule of law” means.

Ukraine: Independent Yet Not Free

Ukraine is the biggest country in Eastern Europe, about the size of Texas. Until 1991, the country was part of the Union of Soviet Socialist Republics (USSR), a one-party state run by communists. First Lenin, then Stalin, Khrushchev, and finally, Gorbachev. After Mikhail Gorbachev’s resignation, the USSR dissolved, allowing the twelve conjoined countries that were part of the union to emerge as independent states.

One of those countries was Ukraine.

As a nation, Ukraine gained its autonomy after it was decided that it no longer needs to follow the USSR laws. Over 90% of voters supported independence. From now on, as Article 1 of Ukraine’s Constitution declared, the country was

Unfortunately, the first two presidents—Kravchuk and Kuchma—and others continued to keep close idealogical ties with Russia.

Independence turned out to be an illusion.

The fight for true independence began.

In the fall of 2014, the fourth president of Ukraine, Viktor Yanukovich, refused to sign an agreement between Ukraine and Europe, provoking a wave of protests soon resulting in a full-blown civil revolution. From the streets of Kyiv—the capital—the conflict spilled to other regions. First, to the South—Crimea—where the local authorities’ lack of trust towards the government gave way to the region’s annexation by Russia. The same year, the Crimea conflict caused another major resistance movement in the East. Nearly 90% of residents of the self-proclaimed republic of Donetsk and Luhansk voted in favour of their independence.

The war for independence continues to this day.

Ukraine is no longer “sovereign and independent.”

The country is divided.

The above snippets from history can shed some light on the current socio-political climate in the world. The problem, as I see it, revolves around the following.

First, people are continuously losing trust in the government. Governments make promises; they also break them. As a result, it is difficult for people to trust their leaders. Until that trust is regained, the relationship between the two sides will remain broken. And without a relationship of trust and mutual respect, freedom is an illusion. War is inescapable. It is difficult to listen to someone who has failed to keep their promises in the past. It is impossible to gain trust when you are thought to be a dictator.

It will take a great deal of creativity on the part of the governments to find ways to nurture relationships with their people. Mere law-making won’t do.

It’s time for relationship-building, not rule-making.

Second, until the supremacy of God, both in politics and our homes, is recognized, we will continue to have a distorted view of authority. Until God becomes a functional king of individual lives, our relationship with human authority will suffer. Take Canada, for example. The country that is built around the three-tier structure of authority (according to the law, at least)--God, government, then people—experiences tensions in the relationship between the government and people. People struggle to see past the government; the government struggles to see past people.

Both struggle to see God.

I’m afraid that until our vision is restored, until we learn to see human relationships in light of our relationship with God, we will continue to be dysfunctional as a country. This applies to those in authority and those who live under human authority.

This is not about democracy.

This is about theocracy.

And yes, I’m aware of the pitfalls of the state that advances its agenda in the name of God. History has taught us that religion can be used in harmful ways, that some kings claim to be gods. However, the problem with theocracy (or democracy) is not God per se; instead, it’s the people and their distorted view of authority. Theocracy I’m talking about is what Jesus meant when he spoke of the Kingdom of God. (Read the parables in the Gospels.)

As Jesus told us, God's kingdom is qualitatively different from the kingdoms of this world; God’s approach to authority is one of self-sacrifice, an attitude of servanthood undergirded by the principles of love, justice, mercy, and peace. The laws of the kingdom of Heaven are directed towards fostering healthy relationships. First, between people and their God, then between people and other people.

Both with God and with others.

We are creatures of freedom, which is both to our advantage and peril. Our struggle for freedom makes us free, but it also turns us into slaves. Just like the country of Ukraine, we often live under the illusion of independence. We think of ourselves as autonomous human beings, not realizing how dependent we are, how much we need each other, how much we need God. You and I need accountability.

This is theocracy, not dictatorship.

This is the Kingdom of God, not democracy.

We all must remember that we are humans created by God and that we all are dependent on him for our freedom. So whether you are a president, a government official, a CEO, a pastor, or a parent, remember that you are human. You are on earth. Under heaven. Under God.

Free to speak. Free to believe. Free to fight. Free to love.

Freedom may be an individual right. Love, however, is a matter of personal responsibility.

Freedom is a law.

Love is a relationship.

Photo by Miltiadis Fragkidis on Unsplash